Throughout history, the beard has marked the image of great illustrious and not so great. Since we have graphic references of the man, he has almost always been seen accompanied by the beard. Already in ancient Mesopotamia, you can see images of imposing bearded who projected their social status in this way. The care of those beards were taken care of by the barbers

who came to the nobility’s call to make beard arrangements

There was no such
barbershop
as such, not hairdresser for men. They were homework, but my$Oh! of the one who did not have groomed beard and hair, because he was immediately labeled barbaric. Likewise, in classical Greece the beard was an unmistakable sign that its bearer was a citizen of high alcurnia. Wise men, philosophers and great thinkers looked beards groomed and cared for. Since then the beard has gone through different stages but always staying very alive, and so on to this day.

Today we are used to watching on the street, film or television, men with beards. It is easy to find a barbershop in Madrid.

An intentional beard helps us project an image more powerful of ourselves, perceiving those around us more security and masculinity. There is no ugly man with a beard, but an ill-suited beard.

The well-advised and structured beard is really essential. It’s the man’s makeup and like a good makeup,you have to know how to apply it depending on the type of face. Faces vary greatly from each other and beards have to adapt to facial features to achieve harmony and style that best reflects the character of the person.

When creating a beard, we have to take into account what are the characteristics of our face and of course, of the beard itself. You have to stop thinking that a beard is a beard, and that it is the same for everyone. Nothing further from reality. We must think that we must enhance the traits that favor us and disguise those that do not, so we will work with volumes, angles, lines and even projections, to get our perfect beard.

It is an easy task to obtain the ideal beard, as long as it’s a professional who takes care of it. Letting yourself be advised is simple, both for the arrangement of the beard and for the
haircut
and our barbershops in
Madrid Centro
are the perfect place for it.

EASILY GET A PERFECT BEARD.

Just like any other part of your body the beard needs care, not only to look good on an aesthetic level, but to give it good health beard and skin that’s underneath it. The regular visit to your trusted barber it is essential for me to advise you and maintain the most appropriate shape of your beard. In addition to your time in the Barbershop, with home maintenance, you can easily get extraordinary results by following some tips that we will recommend below.

You should remember that these three steps, require very little of your time and you will get big changes.

The daily cleaning beard is a routine that you should include in your body hygiene during the shower. Keep in mind that you can’t use any product, as there are specific soaps that fully cover the needs of your beard. The skin underneath is always the big forgotten one and you have to take care of it anyway, as they will be the foundation where it grows. Skin regeneration accumulates dead cells that are partly eliminated through the use of beard soap, needing barely time to do so.

-2nd Step. Hydration of the beard and skin. 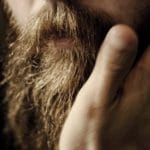 A beard and a hydrated skin on a daily basis eliminates annoying itching and uncomfortable flaking as well as a healthy and lustrous appearance. To show off an enviable beard it is necessary to resort to hydration making sure it is clean and dry. Soften your beard and apply specific products that you can use daily, such as oil or balm that adds weight to hair, eliminating frizz and gaining greater control. Remember that if you apply too much product at once, you will saturate it and it will look too bright. We must use only the amount our beard needs, using a small amount and increase it until you get the right hydration

You need to brush your beard every day. With this you will get to create the desired shape and remove the dead skin. The main thing is that you use a good beard brush designed for that purpose. It should preferably be natural bristles, as it will help you to better direct the hair and distribute correctly the products that you will use for hydration. Brush your beard frequently and make sure you create the right structure throughout its growth. As mentioned above, by brushing your beard daily, you manage to eliminate the flaking that accumulates due to the natural regeneration of the skin, activating the circulation and facilitating the healthy growth of your beard.

Follow these helpful recommendations and you’ll see the good results in no time.

EASILY GET A PERFECT BEARD

Barbershop, Hairdressing
0
Like
Arreglo de barba, barberia, beard brush, corte de pelo, How do I fix my beard
HOW TO FIX THE BEARD.

HOW TO FIX THE BEARD.

The most important thing is that a barber, if possible one of the good ones, will advise you which beard is best for you. Many times we want to have the same beard as a friend or a fashion actor, but we have to think that you are someone else, and that beard you imagine for yourself is not always the most appropriate. Here we will tell you how to fix the beard at home.

The basic recommendation is to have a hair clipper, contour, pin or trimmer machine, as you prefer. In short, a small machine, nothing to do with the machine used to cut hair. Its size and versatility will facilitate and help you a lot in the final result. We will use this tool only and exclusively to mark and clean the contours of the beard.

The first action would be to thoroughly brush your beard with a natural bristle brush, with this you will be able to untangle it and give the desired form to see in what state we have it and that you can obtain a diagnosis and the steps to be taken for maintenance.

The next step we will take will be to mark the cheekbone line, for this we will have two reference points. One, the average height of the ear and the other, the corner of the mouth. Joining those two points with an imaginary line, we will obtain the approximate reference of the height of the beard.

The line you are going to work next will be the jaw or neck line. Paradoxically it is the most complicated, because although it is the bottom line, it will be the line that if we climb a lot, we will directly destroy the beard. That line will give us the angle and projection vision, so it will always be better to leave it lower if we are not sure, and let your barber mark it again on your next appointment.

We must not forget to also clean the outer line of the pin, with it we will join in a perfect straight line with the neck line.

Finally we will clean the area of the upper lip or mustache, but attention, the machine with which we mark the contours of the beard, finished his work and it is totally forbidden to use it for the rest of the maintenance of the beard. The tool with which you will retouch the mustache will be a small scissor, since the mistakes we can make will be much more subtle. Trimming just along the upper lip line, without it being fully exposed, so that the mouth is not artificially framed. Carefully remove those unwanted hairs from the surface of the beard, until matched.

So you will know how to fix the beard at home, as far as possible, until your next appointment with that excellent barber who always leaves us so handsome.

Few film events are going to give so much to talk about and are expected with the expectation of the impending premiere of Avengers: Endgame. Cinephile gatherings smoke over the future of superheroes, and we assume that everything will be resolved in this movie. The cinema has always fed on the comic to a greater or lesser extent, but what happened with Marvel has been a truly unprecedented success. They also wear beards.

THE END IS COMING.

Captain America with a beard.

The production machinery of this score of films has worked like a Swiss watch and created a world of fiction that is hardly repeatable. We are millions of fans who look forward to the next movie of these studios. The formula for the success of these films that certainly fits, has been the union of its entire universe. All movies connect to each other. In this way they have created a spider web from which it is difficult for us to escape, making viewers faithful followers. The creation of a joint narrative is the key to each premiere being followed eagerly, because we all want to know the next chapter, to know the end.

In the comic the interest of the cartoonists is appreciated so that their creatures are alive and that they leave in the cartoons as favored as possible. Some have short hair, others have long or medium hair. There are also knobs and of course, beards. If as I said, in the comic the heroes appeared attractive, on the big screen it can not be less.
Captain America, Thor, Iron Man, Doctor Strange etc … parade before our eyes with mane, goatee or beard, marking the personality and character of each hero in question.

We can see the Asgardian God Thor with a beard of different types. In the beginning it is a short beard that gives youth and that Nordic touch necessary for the character. Then it evolves until it reaches a beard with a completely different color and shape that gives it a more adult and tragic appearance, they also wear beards. Things do not look good for our superheroes. It is necessary to get serious about what lies ahead and what better way to darken the beard, cut the hair and so, do not think of it as if it were a surfer and not a true God.

As for the good and noble Captain America, who always looks well shaved, we see that he was tempted by a beard more in line with his time. In the difficult times of Infinity War, it gives you more character and strength. He is no longer the innocent soldier of the first deliveries. It is as if he wanted to tell us that things have to be changed in order to win, even if it is starting with a makeover, a change that he makes again in this last installment. It may be that in this way they are successful and recover their missing friends.

We also observe how outside the iron armor of Iron Man, the rich industrial tycoon Tony Stark, uses as a complement to accentuate his ego and his cynicism a knob worthy of the best gallant, although that sarcastic smile that looks in all the films makes him very Friendly and one of the characters most appreciated by the public.

Very different is that of the master of the mystical arts, Doctor Strange. It is a character that sports a fine and elegant knob that pronounces his intellect and his English-style gentleman bearing.

It is clear to us at this point that beards in any mode is not just a superhero thing. They also wear beards and hopefully bring them luck.